Gariep Dam is a dam in South Africa, near the town of Norvalspont, bordering the Free State and Eastern Cape provinces. Its primary purpose is for irrigation, domestic and industrial use as well as for power generation.

The Gariep Dam was originally named the Hendrik Verwoerd Dam after the first prime minister of the Republic of South Africa Hendrik Verwoerd on its commission in 1971. However, after the end of apartheid, the Verwoerd name was considered unsuitable. The name was officially changed to Gariep Dam on 4 October 1996. Gariep is San for “Great water”, the original name of the river.

The dam is on the Orange River about 48 km north-east of Colesberg and 208 km south of Bloemfontein. It is in a gorge at the entrance to the Ruigte Valley some 5 km east of Norvalspont.

The wall is 88 m high and has a crest length of 914 m and contains approximately 1.73 million m³ of concrete. The Gariep Dam is the largest storage reservoir in South Africa. In South African English, ‘dam’ refers both to the structure and the lake it impounds. Gariep Dam has a total storage capacity of approximately 5,340,000 mega litres (5,340 hm3) and a surface area of more than 370 square kilometres (140 sq mi) when full. The hydro-electrical power station houses four 90 MW generators, giving a maximum output of 360 MW of electricity at a water flow rate of 800 m³/s.

The structure is a concrete gravity-arch hybrid dam. This design was chosen as the gorge is too wide for a complete arch so flanking walls form gravity abutments to the central arch.

It was built by Dumez, a French construction company.Gariep Dam
Rivers and “spruite” flowing into the dam 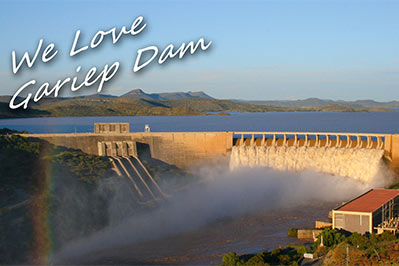 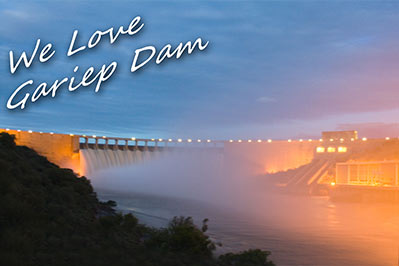 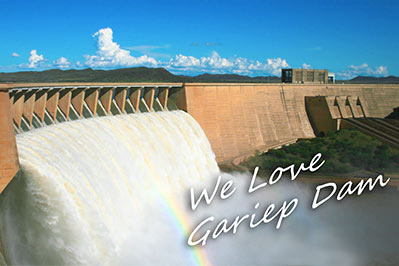